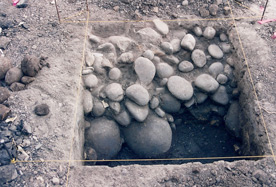 In 1997 the Catholic Archdiocese of Los Angeles began construction of a new school over the site of the original Spanish Colonial Mission Quadrangle and courtyard area, founded by Junipero Serra in 1782. The Mission Quadrangle was the location of the “Neophyte” quarters where the Native Chumash people were housed after they entered the Catholic Mission. The archaeological investigation involved the delineation, testing, and data recovery of the area adjacent to the mission. JMA was able to delineate the boundary of quarters by geophysical testing. Data recovery and mitigation involved excavations at the locations to be impacted by the drilling of structural caissons that would be supporting the school.

A large team of JMA excavators exposed the tile floors beneath the collapsed structure, and discovered evidence of the 1857 earthquake that collapsed the tile roof, as well as numerous features such as a water well, structural footings, and a zanja, or aqueduct. Other data such as prehistoric and historic artifacts and faunal remains were also recovered. Archaeological mitigation and monitoring of grading activities continued during the construction of the school.

Serving California with over 40 years of environmental experience